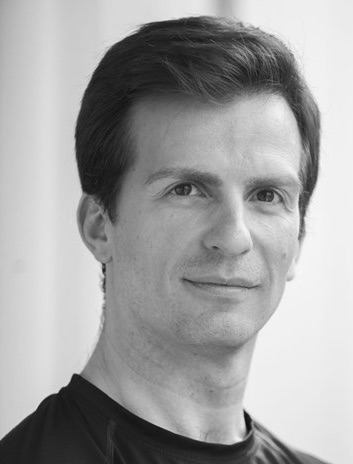 Kaloyan Boyadjiev joined the Norwegian National Ballet in 2002 and was appointed Principal Dancer the following year. He has danced both Romeo and Mercutio in Romeo and Juliet, the Prince in Scarlett's The Firebird and Don José in Carmen – a ballet in three acts, the Prince in The Nutcracker, Ariel in The Tempest and the title role in The Rite of Spring – the latter two both by Tetley. His credits also include roles such as the Jester in Cinderella, Cassio in Lubovitch's Othello, Lucentio in Cranko's The Taming of the Shrew, Stanley in A Streetcar Named Desire and Lysander and Puck in Sund's A Midsummer Night's Dream. He has danced leading roles in Balanchine's Agon, The Four Temperaments and Symphony in Three Movements, Wheeldon's Polyphonia, Duato's Por vos muero and White Darkness, Forsythe's Steptext, Workwithinwork, The Second Detail and One flat thing, reproduced, Ingers Dreamplay, as well as in various Kylián ballets. In addition, he starred in Scarlett's Vespertine as well as in Lightfoot and León's Softly As I Leave You, Shangri-La, Start to Finish, Skew Whiff and Same Difference. Boyadjiev has also made his mark in the world of choreography. He did the choreography for Uncle Vanya at the National Theatre of Norway under the direction of Liv Ullman, while for the Norwegian National Ballet he has created the ballets Lost in Time, Frozen Silence, Fade in Black, Open for Discussion and Roundabout as well as Picture Perfect for The Norwegian National Ballet 2. He realized the choreography for the ensemble scenes in Moum Aunes Hedda Gabler. He was also responsible for the concept and choreography of The National Ballet's new Nutcracker in 2016. Originally from Bulgaria, Boyadjiev studied at the National School of Dance Art in his home city of Sofia. He was principal dancer with the Pact Ballet in Pretoria, South Africa, and the Sofia National Ballet before arriving in Oslo. Beside his career as soloist and choreographer, Boyadjiev is also the leader of The Norwegian National Ballet 2. 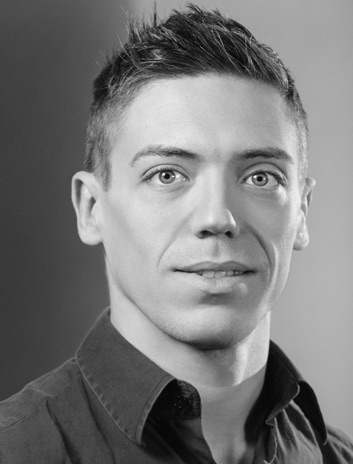 Already by the age of nine he began his dance career at the prestigious dance school Maria de Avila under the direction of Maria de Avila and Lola de Avila in Spain. At fourteen years of age he won the International Competition of Zaragoza 2001 in the junior category and thus his first international dance competition. Just two years later he won the same competition in the senior category. Motivated by these experiences, he began his professional dance career in Sybaa Ballet (System Ballet Aragon), season 2003 - 2004. The following summer, Jorge García won the first place of the international competition Premio Roma 2005. During this competition, Heinz Spoerli, director of the Zurich Ballet, noticed him. The director and choreographer offered Jorge García a contract for the Junior Ballet at the Opernhaus Zurich, the contract "group with Solo" was offered to him at the Zurich Ballet one year later. Already in the following season (2007/08) he was promoted to “Solo” with the Zurich Ballet. He moved on in 2008 to work for the Ballett Theater Basel under the direction of Richard Wherlock as a Soloist Dancer where he has since been dancing numerous leading roles from many of the choreographers that take part as guest choreographers in a very diverse repertory. In 2011 the dancer premiered as a choreographer making a piece for eight dancers titled Match[ing] Sounds. For this choreography he got awarded with the first prize of the Jugenförderpreis des Sperber-Kollegiums in Basel, Switzerland. In the following years he has been building his own repertory and has made more pieces, winning international prizes as a young choreographer at the Cross Connection International Choreographic Competition, Copenhagen, Denmark, Hanover Choreographic International Competition, Germany and Burgos New-York International Choreographic Competition, Burgos, Spain. As a professional choreographer, he is constantly creating new works for Carta Blanca Dance and starting to grow internationally making pieces for companies such Staatstheater Mainz, Stephen Delattre Dance Company, San Francisco Ballet, Zürcher Ballett Junior, Konzert Theater Bern, Béjart Ballet Lausanne and Ballett Theater Basel. Since 2016, he is the Artistic Director of Carta Blanca Dance, a freelance dance company which he founded together with Permi Jhooti in Basel, Switzerland. 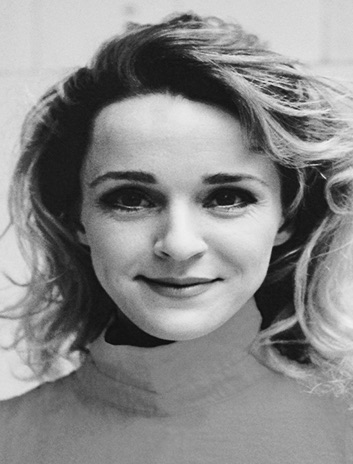 Franco-British-choreographer Sophie Laplane, currently artist in residence at Scottish Ballet, debuted her choreographic skills with her first short work Oxymore , showcased at the The Edinburgh Festival 2013, which was hailed as an immediate success by the critics. She has since presented a number of works for Scottish Ballet in large scale theatres in Scotland and internationally. Her work, Maze, which premiered as part of a Scottish Ballet Triple Bill, was later adapted for film and shot on location by director Eve McConnachie and won the Best Screen Dance Short at the 2015 San Francisco Dance Film Festival. Her richly textured, unpredictable style is further defined in Sibilo, 2016 and her one-act piece Dextera, celebrating the act of creativity, devised for Scottish Ballet’s 50th anniversary celebrations in 2019. In addition to works for Scottish Ballet, Sophie has created various independent pieces, as a freelance artist, including Click! for Ballet Black at the Barbican, Vis-à-Vis at the New York Choreographic Institute, and Watusi for the National Youth Ballet UK at Sadlers Wells Theatre, London. As part of Scottish Ballet’s Digital Season 2017 she developed her interest in 360°filmed dance with The Perfect Place in collaboration with the BBC, and has created A Work In A Week: Idle Eyes, livestreamed for Scottish Ballet’s Digital Season 2019. Dialogue created for the Scottish Ballet Youth Exchange Programme was performed at Turino Danza Festival 2019. Upcoming works include the premiere of Georgette, for Central School of Ballet, March 2020. In Spring 2020 Sibilo will be performed at the Joyce Theater NY and at the Royal Opera House Linbury studio. Characterised by its inventiveness and wit, Sophie wants her work to be accessible and for audiences to relate to the humanity of her vision. Prior to her career as a choreographer, Sophie danced with Scottish Ballet in Classical and Contemporary roles with internationally renowned choreographers. 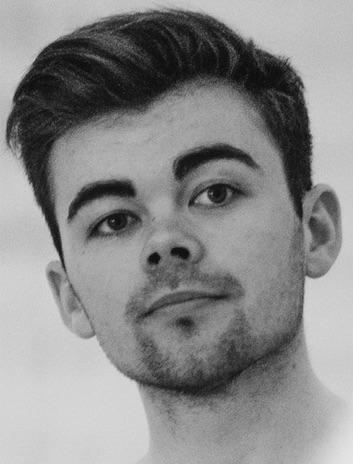 British choreographer Andrew McNicol trained at The Royal Ballet School and completed his formal studies through Ballet Central’s professional choreographic programme. (MA) He has been noted as “a rising star” BBC News “musical and fully engaged” Jann Parry “really someone to watch” Sir Peter Wright Andrew has created works for major companies and organisations such as the Joffrey Ballet (Chicago) The Royal Ballet (London), The Royal Ballet of Flanders (Belgium), BalletX (Philadelphia), The New York Choreographic Institute (New York) The Royal Ballet School, New English Ballet Theatre, Ballet Central, Images Ballet Company among others. Andrew was the recipient of the 2018 BalletX Choreographic Fellowship and created Requiem. The NYtimes wrote “abounds in dramatic situations, McNicol has plenty of formal skill” Main Line Times hailed it as “powerful and sensitive” In 2019 he created Yonder Blue for Chicago’s Joffrey Ballet receiving critical acclaim; “gives a sense of awesome wonderment” Chicago Tribune “A rare gem of a ballet that transcends the here and now” “Achingly gorgeous duet”Lynn Colbert Shapiro. Andrew is a versatile choroegrapher. Alongside creating narrative and abstract ballets for the stage he has also created dance works for film, site specific work most notably for The London Olympics and collaborated with acclaimed opera trio Juice. In 2017 he launched his own company The McNicol Ballet Collective working with dancers from some of the worlds leading ballet companies to create ambitious new ballets, original dance films and special collaborative projects. In 2019 Andrew was invited as choreographic mentor for The Royal Ballet Upper School and will continue this work through 2020. 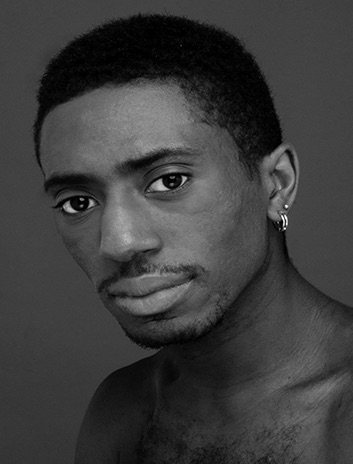 Houston Thomas was born in Chicago (United States), where he started his training at The Chicago High School for the Arts, then in the Academy of Dance, School of the Joffrey Ballet Chicago. He joined the School of American Ballet in 2011-2013, before joined as Apprentice the Desdren Sempeoper Ballet in 2013. He has been promoted as a second-soloist with the Semperoper Ballett. Since a very young age it has always been a dream of him to pursue a career as a choreographer. After having several opportunities to create works and with the encouragement of his director, Aaron S. Watkin, he continues to develop and discover his choreographic voice. The music is always an important component in all his works, which he uses to help inspire and build a vocabulary for the work. He takes great interest in exploring different dance styles while using the fundamental dance language as a base to help build a movement language for his works. The relationship between dancers is always a very important component in his works, which he likes to develop in the form of partnering between all dancers.

Lucas Valente was born in Brazil, where he started his training. After pass by several schools in São Paulo he started to work as a free lancer. Attended, between 2008 and 2010 the Performing arts University at USP (Universidade de São Paulo), and received in 2016 the bachelor in Philosophy in the same university. In 2010 he was invited to join the Ballet Laura Alonso, in Havana – Cuba, company in which he danced for two years. In 2011 he joined with a temporary contract the “Cisne Negro companhia de dança”, in São Paulo. In 2012 he worked in a project from Venice’s biennial called “Arsenalle dela danza”, which was focused in bring together artists from different cultures to share their knowledges. In the same year he started to work with “São Paulo companhia de Dança”, performing Works by Edouard Lock, Marco Goecke, Willian Forsythe, Jiri Kylian, Nacho Duato, Richard Siegal, George Balanchine and several brazilian choreographers. Since the season 2017/2018 he joined the Zurich Ballett. He has been choreographing for the past 7 years, and in the past 4 years he decided to invest more seriously in the career, creating more and more pieces and trying his best to research different styles and genres. Even though the style he has been choreographing the most was contemporary, in the past 2 years he has been experimenting more neoclassical and classical movements and pointe shoes choreographies. As big influences for this phase his references were Willian Forsythe, Edouard Lock, George Balanchine and Hans Van Manen. In this years as a dancer he had the pleasure of dancing some of the pieces from this artists (and to watch many other pieces), who somehow changed his point of view of dance, of ballet, of technique.